BloodBankTalk:Slow pulse for an athlete donor 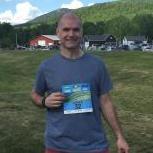